This page illustrates how we found the garden originally and the work we carried out to redesign it.

The rear garden is long and narrow and slopes upwards quite steeply in places. The brick wall has seen better days and doesn’t seem to have any foundations which, as it is retaining a lot of earth, isn’t good!And those concrete steps – all different heights, so not very safe. 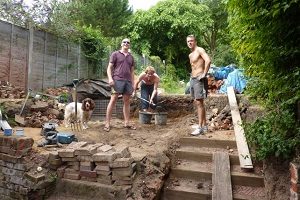 The idea is to create a series of terraces, using wire cages (gabions) filled with rubble to hold back the earth.

The concrete steps and half the brick wall have gone and a start has been made on a new flight with wider steps made from large timbers the size of railway sleepers and recycled brick stable pavers.
The team are digging out the lower terrace. They were assisted in this over several weeks by a fox who insisted on digging out a den here!

Things are looking better now, with York stone flags on the lower terrace and a herb garden on the second terrace.

In the distance can be seen the re-positioned wendy house. The next page will show some of the details.