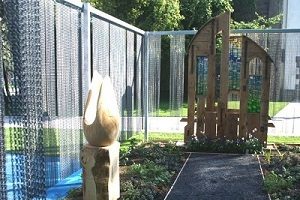 Setting a fine example of Ishmaelandscape‘s practice of encouraging collaborative working within a network of artists and local activists, George Ishmael & Friends of Norwich in Bloom, developed a Norwich Twin City Friendship garden in Koblenz as part of the Bundesgartenschau, Germany’s biannual horticultural show.

The Friendship garden, with its many herbaceous perennials and grasses were laid out in the New Wave style that George widely employed in parks and open spaces across Norwich over the last 10 years as Norwich City Council’s Landscape, Planning & Strategy Manager. This was designed to be reminiscent of the many medieval churches in Norwich, supporting George’s Heavenly Gardens Project in association with the Friends of Norwich Historic Churches Trust.

Crocosmia’s and the red-orange-yellow palette of their flowers were specifically chosen for the display, to remind of Norwich’s proud association with their heritage of early breeding at Earlham Hall, Westwick Hall and more recently at Bressingham Gardens.

Most of the selected plants came from the local Howard Nurseries of Wortham, near Diss. We really appreciate their great help and support in this fresh venture. One really spectacular plant is the day-lily Cathys Sunset, which was actually bred by Howards.

The architectural centrepiece is a three-meter-high oak-framed Gothic window feature with stained glass panels designed with a wave effect, created and fashioned by Sarah Bristow in her Norwich Glassworks Studio. Sarah also created an etched glass panel for the window, bearing the names and profiles of a number of Norwich churches, so highlighting the many medieval churches which still exist in our Fine City.

George constructed the window frame mainly from recycled materials, including old timber sourced locally, plus iron fixtures and fittings from a friendly Norfolk farmer. The bench pew has been carefully protected against the elements and was originally located at St. John de Sepulchre church in Finkelgate.

Martin Pigg of Natural Sculpture, whose work typically represents growth and new beginnings, specifically designed a magnificent flower symbol sculpture at his Norwich workshop for our garden setting. The sculpture is made entirely of English oak and sits upon an impressive, huge, heavy base.

For the months of April and May, the hidden containers hold tulips in carefully chosen colours. One such delightful item is the Late Viridflora tulip Yellow Spring Green, whose yellow with a green flush will be redolent of the Norwich City Football club strip.

All the plants and features travelled from Norfolk to Koblenz by van, crossing the North Sea on the Harwich to Hook of Holland ferry, with George Ishmael and Chris Southgate as drivers, porters and riggers! They took more than three long days to build the garden by hand, reviving their carpentry skills as they went along. But on the final day and as the garden was still unfinished, local help was offered. Two Koblenz city managers who normally work in offices, volunteered to help complete the garden. Their generous support was another example of the spirit of friendship which exists between the twin cities of Norwich and Koblenz.

Finance for this exciting project has come from the City of Koblenz via Norwich City Council. We are also grateful for the immense support we have received from the other organisations and individuals.

During the winter months of 2010-11 Friends of Norwich in Bloom Ambassador Bill Webster has been busy painting several water colours of Norfolk and Norwich Crocosmia Hybrids. Eight of these have been copied as decoration onto the bi-lingual sign for visitors to the Norwich garden. Later the paintings will be gifts to the Lord Mayor of Koblenz and other dignitaries.

If you would like advice on a Landscape Design project or help in exhibiting your art and sculpture work within a green setting, we would love to hear from you. Please contact us.