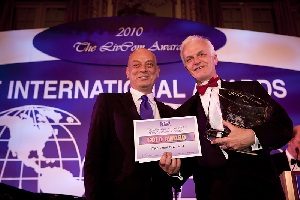 The LivCom Awards, launched in 1997, is the only international competition focussing on best practice in the management of the local environment. The awards, endorsed by the United Nations Environment Programme, aim to improve the quality of life of individual citizens through the creation of ‘liveable communities’. Embracing all nations and cultures, there are now over 50 countries regularly represented.

Every year, the awards bring together some of the world’s leading innovators in the field. The 2010 finals, held in Chicago, Illinois, included representatives from some of the smallest communities in the world (Emly, Republic of Ireland: population 900) to some of the very largest (Medellin, Colombia: population 3.8million).

The awards are divided into three categories: Whole City, Sustainable Projects and a Bursary Award. The Whole City category is then further divided into five sub-categories according to the size of population – with Norwich taking top spot and a Gold Award in Category C (75,000 – 150,000 pop.).

George Ishmael, a former City Council Landscape Architect and founding member of the Ishmaelandscape consultancy, based in Norwich, put Norwich’s case forward. Due to the current economic climate, sponsorship was difficult to find; but George was so convinced of the city’s case, that he funded the presentation personally.

A Britain in Bloom Urban Regeneration winner in 2008, George was keen to underline Norwich’s credentials as a dynamic city with a prosperous and growing economy, which at the same time places high value on sustainable environmental management.

The judges heard that Norwich has long led the way in ‘green’ planning – in 1985 the City Council adopted a green plan designed by George himself, which aimed to protect and enhance the landscape setting of the city. This was the first such plan in the UK and focussed on involving the local community in carrying out a programme of landscape improvement and generally raising awareness of environmental matters.

George was also commended for his life-long ambition to make Norwich the capital city of trees within the UK, which now cares for more than a quarter of a million trees. He also answered questions regarding traffic and pollution in the city, emphasising that Norwich has the second highest proportion of people travelling to work on foot or cycle (32%) in the UK.

George regularly delivers guided landscape and historical walking tours within the city and has been instrumental in promoting heritage open days and community participation.

Claudette Savaria, head of the judging panel, said: “Community participation is a real strength in Norwich, with an array of panels and very strong non-profit partnerships. The practice of communication with the community through neighbourhood walkabouts was a great example and impressed the judging panel”.

In addition to the Whole City Award, George was presented with a Special Project Award for his work with ‘Norwich Heavenly Gardens’. This unique project aims to preserve, renovate and protect ancient churchyards to provide green spaces for community use and enjoyment. The judges were hopeful that the Award will raise the profile of the Heavenly Gardens project to help it acquire important funding.

Contact us to find out more or register your support for our work on the Heavenly Gardens project.